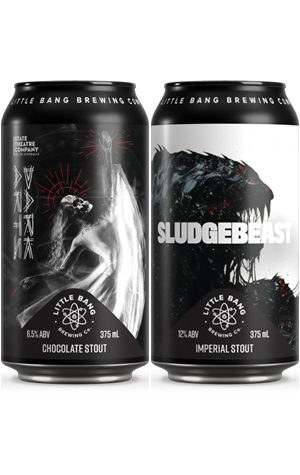 Why bring one dark beer out for winter when you can release two? (OK, if we're honest, there's more than two in the Little Bang locker, but bear with us as these two have been released in cans within a week of each other...)

Dark Arts is the Stepney brewers' joint venture with SA's State Theatre Company. Apparently, the latter requested "a dark beer for a dark show", but by the end of the collaboration Little Bang "just wanted to give them some chocolates." The aroma suggests they were tempted to sneak in some nougat too as there's a creamy sweetness accompanying the chocolate on the nose. It's full and dessert like, with figs, fudge, vanilla and a dusting of cacao completing the scene.

As for Sludgebeast, it certainly has the appearance to match up to its name: in the glass it looks like oil buried beneath a layer of clay, such is the density of the head. Here, there's Port-soaked oak, coffee and cocoa at play, all of which are sacrificed on the altar of the beast and turned into something intensely chocolaty at first that transitions more into roasty territory as it crawls towards your gullet, as if squeezed from a tube. It's boozily warming without being overtly hot – there's too much smothering sludginess to allow that to happen, after all.