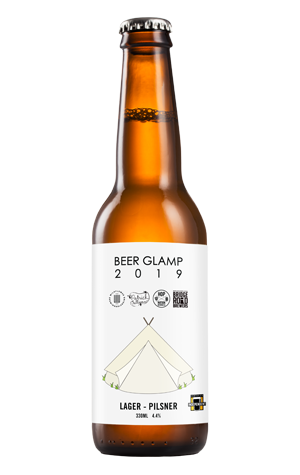 The Kraus clan may be heading to Austria for a year spent living with Bridge Road Brewers co-founder Maria’s family, but husband Ben ensured he stayed busy right up until departure day, not only declaring their brewery an independent nation but also launching the Beer Glamp series. Inspired by Sierra Nevada’s Beer Camps, this saw his brewery team joined by Hop Nation, Wildflower and winemaker Patrick Sullivan for a couple of brews in the lead up to the 2019 High Country Hops festival.

The NEIPA is only being released on tap so I need to rely on the brewer's notes for that one: "Aroma is big and juicy dominated by stone fruit, pineapple and passionfruit. Under this is the aroma of lemon and lime coupled with spice and clove phenolics from the Brettanomyces. The palate is full of ripe melon and peach with just a hint of bitterness to cut through the full bodied juiciness of this beer."

But I did get my hands on a pre-release bottle of the Pilsner and, boy, it’s up there with the best beers to land at Crafty Towers this year. It’s inspired by the pilsners of southern Germany, unfiltered and with a touch of Spelt in the grain bill for added texture but it’s the hops that take centre stage. Not in the way you might have come to expect if your introduction to good beer has been through the US led modern revolution, however, but rather in a very Old World manner.

Grassy, floral, earthy, drying and almost twiggy, their impact hits early and lingers – all without ever getting really, you know, bitter. The malt provides body and a little cracker and honey character, but really this is a celebration of traditional European pilsner hop characters. Upon sampling, I said to Mrs Pint it was like the kellerbier you’d be handed by a beaming European brewmaster at the end of a tour; or, as Ben put it upon receiving an excitable text around the same time: “It’s like being transported to Bavaria.”