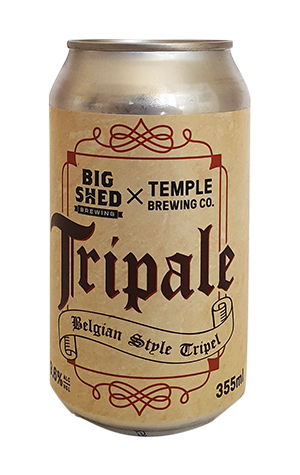 High profile collaborations have been a part of Good Beer Week since the early days, with Melbourne breweries taking advantage of their international peers who descend on the city. But brewers don’t need to traverse oceans to pick up a malt shovel when in town, as was the case during this year’s festival when Adelaide’s Big Shed Brewing popped to Brunswick to brew up something Belgian.

While it might be appearing in can, Tripale is a decidedly Old World beer, with the gothic fonts of its packaging paying homage to the tripels you'll find filling shelves and fridges in Belgium. The beer inside is just as classically-minded a take too, where the pale golden body might hint at a far lighter beer but one sniff makes it clear there’s plenty lying in wait. Expect to pick up cloves, spice, lemon, dried plum and a peppery finish, all laying upon a soft and sweet malty body.