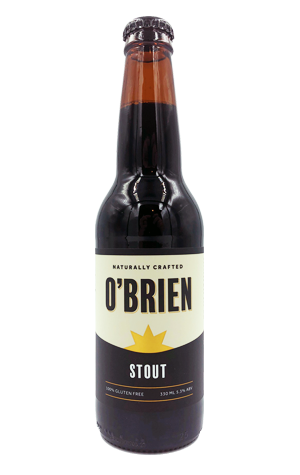 Slowly but surely, beer lovers with coeliac disease or who are otherwise gluten intolerant are being catered for by a greater number of local brewers. For years, however, their options were far fewer, with the main supplier for their particular needs being O'Brien, the Ballarat brewery that's been producing nothing but gluten free beers since 2005.

In 2019, almost a decade and a half on from their first release, the brewery team has been undergoing a little change, releasing their first cans and rebranding too. One thing that hasn't changed is the liquid making up their annual winter Stout release – and why would they when the beer is good enough to have picked up another gold medal for O'Brien – their third in six years – at the Australian International Beer Awards in May 2019?

Brewed with roasted sorghum and millet, it's a very dark brown pour and moves subtly from chocolate to soft espresso with a hint of smokiness adding a little complexity in what's a smooth take on a classic dry Irish stout.