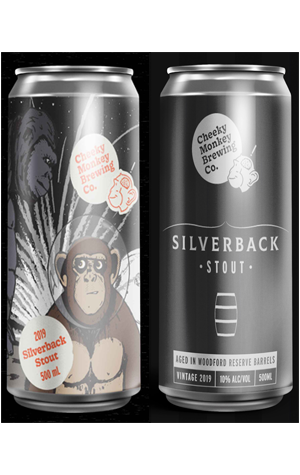 Silverback’s annual release has become a keenly anticipated winter occurrence in WA. In 2018, the Cheeky Monkey brewers expanded on the OG with a trio of barrel expressions and a vastly simplified recipe. For 2019, the recipe remains lean with the most obvious difference being the replacement of the angry animal climbing up a building on the label with a Planet of the Apes meets Soviet space program chimp in line up with the recent rebrand.

The straight Silverback holds masses of coffee and dark chocolate undertones, although the medium body is slighter than first impressions would suggest. Bitterness is equally restrained for style while the dry finish provides lasting palate length.

Complimenting the 2019 release is a Woodford Reserve Barrel-Aged Silverback that spent six months in barrel and a further six months conditioning in cans because, as national sales manager Brendan Day says: "These beers need time." The commitment to the concept is admirable considering excise tax needs to be paid once the beer is packaged, which is a significant drain on cash flow when it's a beer that’s not going to be sold for another half a year.

While many are now dabbling with barrels for mixed ferments, Cheeky Monkey’s interest instead is in capturing a clean barrel expression with balance and, in this year’s case, no blending back with a base beer – this is 100 percent bourbon barrel-aged beer. Coffee and chocolate are now a cohesive mocha, joined by barrel coconut and vanilla. The stave influence provides structural elements without dominating or thinning the beer – this is fuller than the original, very balanced and an elegant addition to Cheeky’s RIS troop.