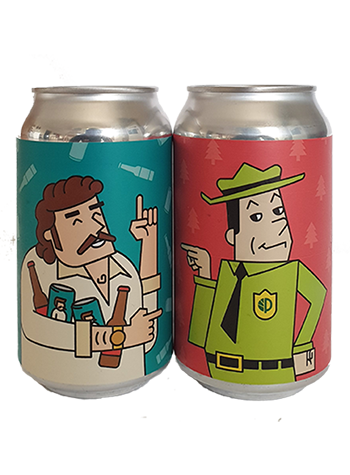 The gypsy brewers at CoConspirators have been busy conspiring with hops of late, with two hazy collaborations released in quick succession. The more restrained of the two was brewed with The Park Hotel in Abbotsford and pays homage to Yogi Bear’s constant foil: The Park Ranger. And, like a walk through Jellystone Park or a raid of the picnic basket, the hazy pale provides a fragrant mix of fruit flavours. Largely those take the shape of citrus, pawpaw and pine that stand out against the palest and leanest of malt bodies.

While The Park Rangers is restrained, The Distributor is a garish collaboration with Redwood Distributors. The figure on the can looks like a man who’s partied a little too long (both into the night and more generally speaking), possibly the result of trying too many 7.6 percent ABV hazy double IPAs. Brewed with lactose, compared to The Park Ranger, it’s a far thicker, creamier affair, where the mix of Sabro, Citra and Galaxy hops provide a heady mix of mango, passionfruit and some coconut.