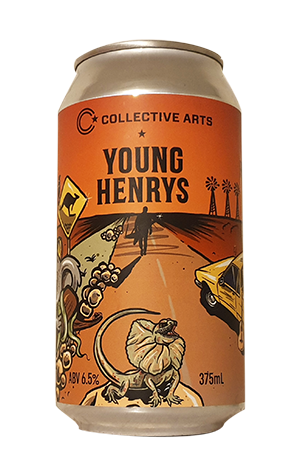 For this year’s Adelaide Beer & BBQ Festival, Canadian brewery Collective Arts brewed collaboration beers with six breweries, and this Rye IPA brewed with Young Henry is Sydney’s contribution. In a sea of juicy IPAs, this beer is a drop of resin; the syrupy body brings West Coast flavours, along with layers of cocoa and spice coming in at the finish, and a surprising bite for only 37 IBUs.

Collective Arts are known for using cans as canvases, so you could say the design commissioned for each beer was as important as the beer itself. The Young Henrys can design was done by Jesse Wright, a friend of YH who’s regularly worked with the brewery on label art and murals.

The road trip-themed label shows a broken down ute in the outback (with a “Best Served Loud” bumper sticker and other hints at YH branding) surrounded by vicious Aussie animals (such as a psychotic koala cornering a snake). Doesn’t get much more ‘Straya than that.