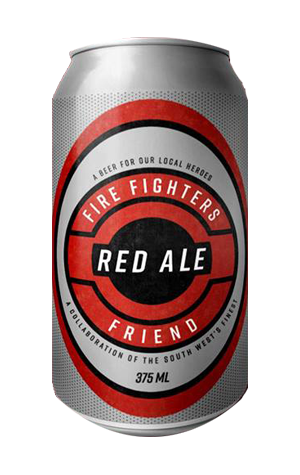 Collaboration has steadily grown in popularity within the wider craft beer world with brewers finding pretty much any reason to collaborate with local, national and overseas brewers or, indeed, those outside the realm of beer: coffee, wine, clothing, TV, sports, food, events, bands...

Brewing a beer for charity seems as good a reason as any to organise a brew day and, although Firefighters Red Ale might not be the first beer brewed for charitable purposes, or the first red ale named after firemen we've written about, it just may be the first beer brewed in Australia that saw brewers collaborating with firefighters, in this case the volunteer firefighters of WA’s South West. The beer was brewed with a few local vollies present (some are heavily involved in the brewing industry) with all proceeds going to help future fire and emergency efforts.

Grab yourself a can of this limited release and raise a glass to the hard-working firefighters of WA.