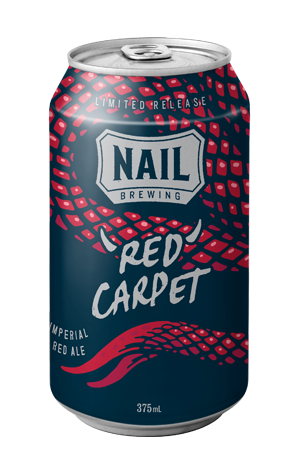 Originally brewed for GABS 3016 as a 9 percent-plus, scaled up version of the brewery’s Red Ale – itself a permanent iteration of the Citra driven Nail Brew Log #4 – Nail’s Red Carpet returns once more as a winter seasonal for 2016.

With a smooth toffee malt focus, Red Carpet is decidedly an imperial re ale, rather than imperial red IPA. Any bitterness at play is purely there for balance, which opens up the palate for citrus, subtle booze licks – this year is its lowest ABV incarnation yet – and a light toast character.

The forked snake tongue on the can should be taken as a warning too: Red Carpet 2019 is devilishly easy to drink.