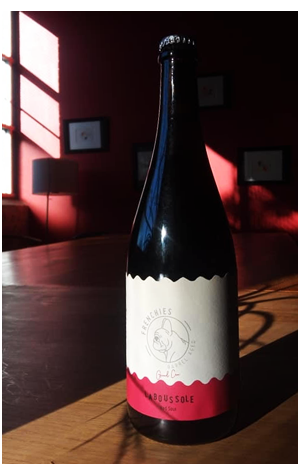 Bières de garde are one of the rarest beer styles brewed in Australia. In fact, with the release of Frenchies' La Boussole, you could buy more bières de garde from the Rosebery bistro and brewery than just about every other brewery in the country combined. What sets La Boussole apart from the others, however, is it’s the first out of Frenchies' barrel-ageing program.

La Boussole (French for compass) is named for the French frigate and sister ship to the L’Astrolabe, which sailed under the command of the famous La Pérouse who landed in Botany Bay shortly after the British colonialists in 1788. As an aside for all of The Crafty Pint’s legions of maritime history fans, a 16-year-old Napoléon Bonaparte applied to crew the La Pérouse expedition but was (luckily for him but unluckily for most of continental Europe and Northern Africa) left behind.

The beer itself has been created by ageing some Astrolabe in French oak barrels hailing from the Bird in Hand winery in the Adelaide Hills. The complete brewing and blending process is very complex but, essentially, it’s Astrolabe that’s been inoculated with brettanomyces, pediococcus and lactobacillus and aged in shiraz barrels then bottle conditioned for a few months.

The addition of the wild organisms has upped the complexity without rendering the beer unrecognisable from its origins. It’ll be fascinating to see how this beer will evolve with a bit of cellaring. If it’s anything like its namesake, La Boussole will be destroyed on a reef near the island of Vanikoro in the Solomon Islands and its crew massacred by the locals. So let’s just hope it’s not true to form, hey?