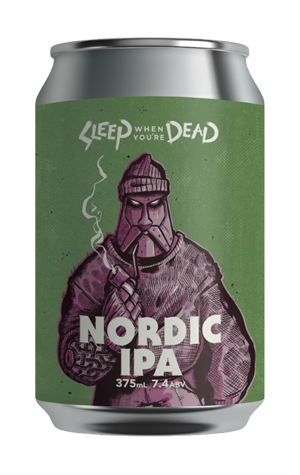 The majority of the beers in Ballistic’s Sleep When You’re Dead series have been about the hops, the whole hops, and nothing but the hops. But, as with the India Brown Ale, one of the first SWYD beers, the Nordic IPA expects the hops to share the spotlight. Not so much with the malt this time, but with the yeast - Nordic IPA is made with kveik, which we’ve written about, and which brewers around the country are experimenting with.

It’s difficult to know exactly which aromas and flavours are coming from the hops, and which are coming from the Hornindal kveik. The aroma brings citrus and a syrupy floral scent not unlike honeysuckle. In the mouth, dried tropical fruits are the first on the scene, but each sip brings a slow transformation, as a slight grain character and bitter walnuts take over.

If you’re going to trek through the mountains of Norway, have a few tinnies of this stored away in your backpack - it’s like trail mix in a can.