Beer Stone & Wood Counter Culture: It'd Be Rude Not To 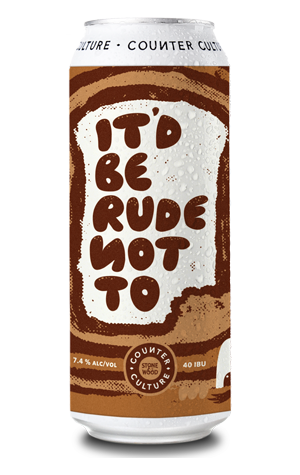 Stone & Wood's Counter Culture series is proving rather popular and, following the imperial raspberry Berliner Weisse that topped our mid-year Best New Beers poll and the hazy mango IPA that followed, they're heading even further into artery-troubling territory with number three. It's called It'd Be Rude Not To and is tagged an imperial milk stout, yet is rather more than that: laden with maple syrup, vanilla beans and five kilos of cinnamon, it's the brewers' stab at recreating French toast in beer form.

Pouring a deeply dark brown, it wallows rather than sits in the glass, emitting luscious, even voluptuous aromas in which your personal preferences will dictate whether it's the maple syrup or the cinnamon that catch your attention first atop the sweet, sweet milk chocolate. Sweet is arguably the defining word here, with the liquid not too far off that of a dense milk chocolate milkshake; a touch of toasted malt and roastiness takes the edge off the sweet chocolate and the drying effects of the cinnamon look to do the same with the impossible-to-miss maple syrup.

If Killer Kween was a challenger for the most dangerously drinkable crown, her latest companion piece is more a beer to be approached at leisure.