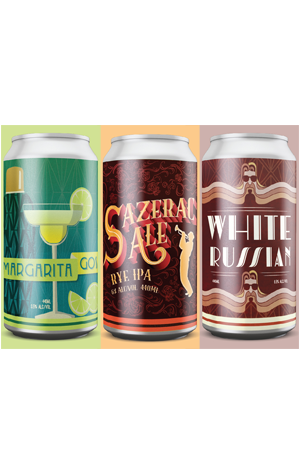 Hargreaves Hill are welcoming a third cocktail-inspired beer to their roster for winter 2019, and releasing all three at the same time too. Fans of the brewery will likely be familiar with the Margarita Gose, with this year's version presenting a little softer and rounder than memory suggests of its predecessors, while still serving up a little funk, plenty of saltiness and, of course, the requisite lime and acid.

The returning Sazerac Ale pours a wonderful colour: regal like a monarch's gown. The malts are lush and rich on the nose, reminiscent of a toned down version of the brewery's Phoenix Imperial Red. Best enjoyed once it's had a little time to warm once pulled from the fridge, there's also spice and a little perfume to be found in the aroma. It lands lighter than you might expect on the palate but still offers complexity, with deep Olde English style marmalade, toastiness and burnt sugar in the mix.

The newcomer is White Russian and comes with a marvellous Dude-inspired label from Crafty graphic designer Jessie at Craft Instinct. There's plenty going on here too: it's alternately herbaceous, sweet and creamy, and coffee like (more coffee bean than finished coffee, we reckon). There's a little sticky sweetness on the palate and a touch of backend heat while some cherry purée was added at the last minute to mimic the cocktail's traditional garnish. They recommend taking your first sip from the can before pouring as it may well not look as you'd expect.

Cans out from Aug 1; kegs launching here on Aug 9