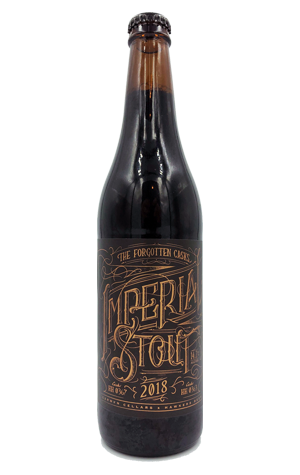 By their very nature, barrel-aged beers are rarefied beasts, in many cases unique. Even within that rarefied realm, this collaboration between Thornbury venue Carwyn Cellars and Hawkers is – if you'll forgive the tautology – very unique. Why? Well, the barrels used to age a portion of the brewer's 2018 Imperial Stout were the freshly-emptied 17-year-old whisky casks the Carwyn team acquired from Sullivans Cove to launch their spirits range. And not only are there no more such casks left but it may well be that the Carwyn spirits range starts and ends with that singular Forgotten Casks release.

Given all the above, it's not a beer you'd want to muck up. So there will likely have been satisfaction and relief when the liquid destined for a few hundred bottles was extracted as it's captured the intensity you'd expect when an 11.5 percent ABV spends 17 months in whisky barrels (and rises to 14.2 percent ABV along the way). Indeed, sample it alongside a straight imperial stout and you'd be forgiven for thinking you had a porter in your hand, perhaps even a mug of Milo...

The pickup from the barrels means there's barely a head to speak of, while the dark chocolate, roasted malts and espresso characters are subsumed by a velvety smothering of oak, vanilla, creamy caramel, figs and dark fruit, all delivered with the punch of a fortified wine. Line up some quality cheese and good mates and you're set.