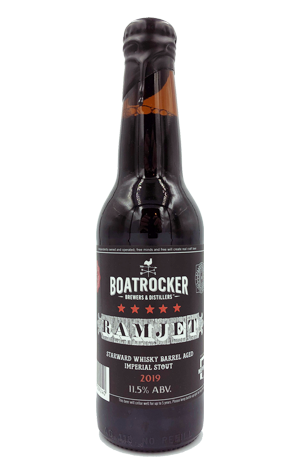 Of all the beers released in Australia each year, there are few that need an introduction less than Boatrocker's Ramjet. So let's cut straight to the chase with the 2019 version of the Starward barrel-aged imperial stout.

On the booze front, it's been reined in from last year's 13.4 percent ABV monster to a practically sessionable 11.5; on the other hand, it also feels like they've loosened the reins a little when it comes to setting the whisky character free, allowing as much Starward character to inhabit the liquid as possible while still being recognisably an imperial stout. Indeed, the comments of one Crafty team member who shared in the tasting and was driving home afterwards went something like...

"I feel like smelling this has put me over the limit. Oh my god, I'm really scared."

He needn't have been as, peer beneath the veil of New World whisky-derived caramel and vanilla and the choc fudge of the base beer is awaiting, viscous and sticky and luxuriant. I won't recount the comments of the aforementioned team member upon overcoming his fears but I will say this: if Cleopatra had taste, she'd have been bathing in Ramjet instead of asses' milk.