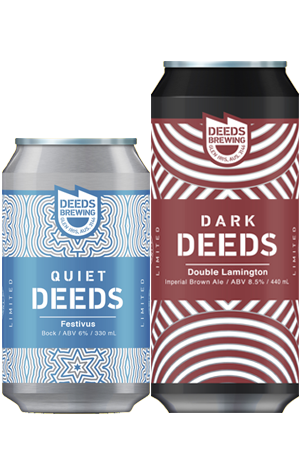 We've said it before and we'll say it again. But if you get the chance to try a new beer without having much idea of what it is, do it. It's like a partial blind tasting and is the approach I take, where possible, when sampling new arrivals. In part, it's to allow the senses to go to work without preconceptions; in part, it's to see if I agree with the brewers. And it can lead to fun experiences like one with Deeds Brewing's Festivus.

I knew it was a bock before pouring, but that only led to a somewhat bemused set of tasting notes: "Amaretto? Boozy, spiced biscuit cake? Rummy stewed fruits? A little perfume. Hmmm... there's biscuity malts and a drying bitterness underpinning it but it's more a case of challenging your memory to work out just what it reminds you of."

Turns out there's cinnamon, bitter orange and ginger in the mix, the intention being to recreate the feel of European winter markets rather than a straight bock. Makes sense now!

As for Double Lamington, it was a case of putting personal preferences aside. I've made my peace with most foods over my four-and-a-bit decades on the planet (and ate some very unusual parts of animals when still partaking of the flesh), but I just cannot get with desiccated coconut. But, for you, readers, anything.

Certainly, there's heaps of coconut on the nose, not to mention plenty of raspberry and sweetness galore. It's not as heavy on the palate as the aroma suggests, yet still has a lolly like flavours that brings to mind raspberry twists with a coating of chocolate.