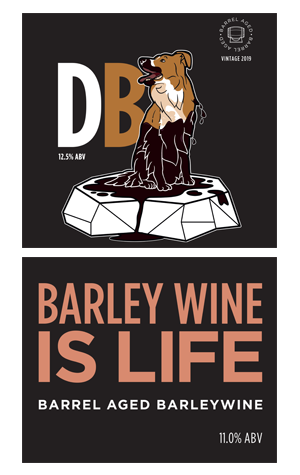 We’re well and truly into the thick of "big beer" season and the multitudinous Rocky Ridge brewers aren’t holding back with their seasonal releases of gutsy, warming ales. Most notably, their 2019 vintages of DB Russian Imperial Stout (previously Dirty Bitch after one of the brewery dogs) and Barleywine Is Life – both barrel aged – which have had many a punter waiting in anticipation.

This year's DB comes in at a sizeable 12.5 percent ABV and, after spending six months in shiraz barrels with shiraz grapes, a deceptively smooth beer, considering its heft, results. A surprisingly low 20 IBU allows some booze to poke through the residual sweetness and vibrant red wine notes are apparent too.

Barleywine Is Life, on the other hand, lands at 11 percent ABV and with a bigger bitterness. Resting for six months in spent chardonnay barrels has created some warming woodiness and vanilla notes. Length, caramel and resinous hops all feature in this limited run of rugged, indelible barleywine that you’ll really want to get your hands on because, after all, Barleywine is life.