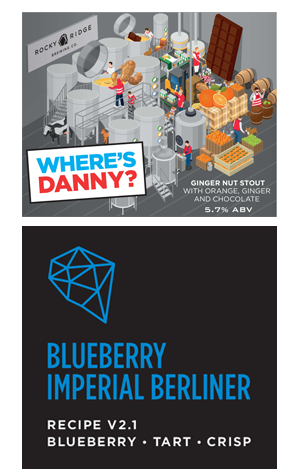 As has been the tradition since they launched, in recent weeks WA punters have had a slew of new releases from the team at Rocky Ridge to tuck into, not least among them a ginger nut stout brewed in honour of assistant brewer and all-round nice guy Ash "Danny" Gale. and the trend-bending Blueberry Imperial Berliner.

Where’s Danny is an American style stout brewed with chocolate, orange and fresh ginger. Plentiful quantities were added during brewing and fermentation to ensure each adjunct was as prominent as the next, the result being a great example of a beer doing as it says on the can, which itself features entertaining packaging. A fitting release for the man on the can.

The imperial version of their popular Blueberry Berliner lands with a substantial 6.5 percent ABV, and is a tart, fruit-driven sour that errs on the side of funky with plenty of fresh berry flavour. It's set to head further afield in early September but is available at the Rocky Ridge Cellar Door before then.