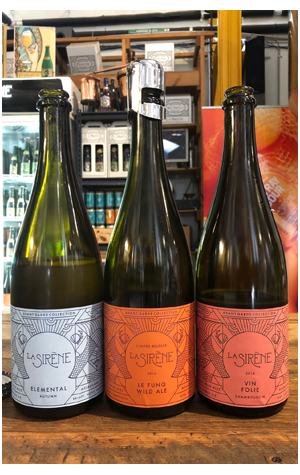 Across a few winter weeks, La Sirène have released three more beers from their barrel program. Each has its distinct character yet they all share common traits, none more so than the delightfully refreshing and cleansing acidity the comes from the Alphington brewery’s evolving house character. It comes from the mixed culture derived in great part from the atmosphere that inhabits and surrounds their brewery and offers both that refreshing underbelly to so many of their beers as well as subtle, fruit-driven complexities; indeed, it’s testament to careful curation of the culture and the benefits only time can bring to this approach to brewing.

As for the three beers, let’s start with the newest: La Funq. It might sound like a hip hop track and is, in a manner of speaking, a compilation too: at its heart is saison that was put into barrels way back in 2014 along with shredded mandarins, later blended with barrel-aged saisons from 2015 and 2016. What hits you first is just how vibrant the mandarin character remains after all this time, fruity and with a lively tang. Leave it in your glass a while and that morphs into an orange creme like character as the soft oak comes into play, with subtle funky yeast characters and a little tannic grip completing the picture.

Elemental – Autumn is the launch of what will be seasonal releases for which the brewing team will raid the grain store and hop chest, assess what’s left and build a recipe. According to brewery founder Costa Nikias, it’s “in the spirit of frugality” of the days when the farmhouse beers that inspired La Sirène were first brewed. Here, there’s a riot of candied lemon and grapefruit and a tart, refreshing acidity. It’s bright and lifted with a bite reminiscent of citrus zest.

The trio is completed by this year’s Vin Folie, in which grenache grapes are replaced by the little known or used chambourcin, which they sourced from a Mornington Peninsula vineyard. It’s a US-French hybrid that produces big, juicy grapes and has helped create a beer that pours pink, vibrant and sparkling. Green strawberries sit atop a deep, broad, earthy funk and a little toasted coconut from the extended period in oak, not to mention a very, very dry finish.