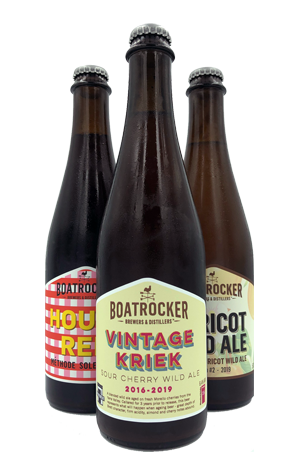 The Boatrocker brewers have been plundering their barrel stock and blending away to create three new releases – two new vintages of past beers and one a fruited sour that's been cellared for three years.

Starting with the new new beer, Vintage Kriek is a blended wild ale aged on Morello cherries from the Yarra Valley and sits a long way from the sweeter, cordial like Krieks you may have encountered from some Belgian producers. It's more pink blush in colour than lurid red, with a fizzy carbonation that carries a gentle (well, everything's relative) berry acidity on the nose. It's feistier to taste, both in terms of vibrant acidity and drying character. The fruit sits amid the frivolity, with a soft, almond like oak character in the midst too. Not a million miles from a sparkling rosé.

The 2019 Solera blend of House Red possesses such a deeply murky chestnut hue it simply looks like there are beers up to four-years-old within. It kicks off with berry jam, hints of marzipan, a little chocolate and some oaky complexity that builds as it warms, plus honey, brown sugar and a hint of acid in the aroma too. It might sound like everything but the kitchen sink but it's all rather integrated. The lively acidity hits harder to taste, carrying out a refreshing swoop across your palate, before leaving a sweet and sharp, cherry-berry blanket topped by a gentle cloud of funk in its wake.

Last year's Apricot Wild Ale proved one of the brewery's most popular releases with beer geeks; here it's a blend of barrels ranging from 12 to 24 months in age racked over fruit from north east Victoria for a couple of months. Hazy and pale yellow, there's a mellow, earthy, lactic nature to the aroma, with the fruit presenting soft and gentle. That said, there's little soft and gentle about the palate impact: it could be the dictionary definition of bracing. A prickly carbonation cuts through the sticky, sweeter side of the beer to ensure its acidic side wins out, while the lacto character lingers like a spectator in the bleachers.