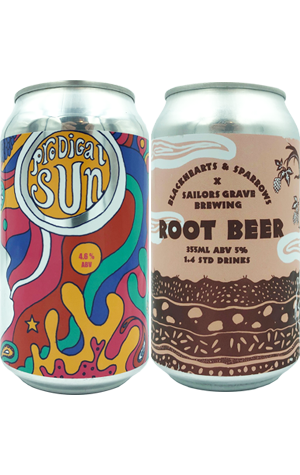 The ever innovative Sailors Grave are proving popular collaborators and seem happy to accept the invitations coming their way. Here are two more joint ventures, with Prodigal Sun a psychedelically-livoried concoction conceived with Earl's Juke Joint in Newtown. Inspired by the venue's El Chooky cocktail, it comes with a suitably Sailors Grave genesis: kettle soured and laden with red malts, various citrus fruits, coconut and bitter aperitif as well as Citra and Cascade hops. It kicks off with a cherry cola like aroma and leans towards the malt driven on the nose before changing things up once liquid hits mouth. There's a reasonably potent lick of acidity hitting first, with some deep, intense citrus flavours and a faint hit of coconut in the mix. But it's that sweeter malt character and the bitter aperitif addition that linger longest.

Root Beer sees them hook up once more with Blackhearts & Sparrows to recreate root beer in boozy form through the use of roots, barks, berries and vanilla. Their success is hard to judge accurately when root beer sits very much in the lower percentile of drinks you'd ever willingly drink. But I can say the beer has an intense anise / sarsaparilla bouquet that hits hard and perfume like, characters that follows through to taste, bringing refreshment to the palate and a quirkily aromatic finish.