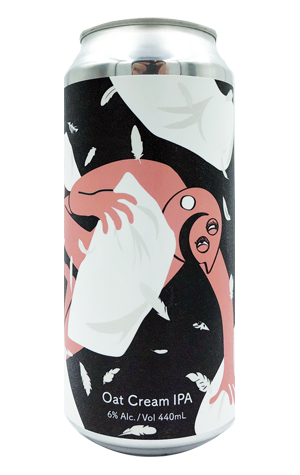 They've been filling CANimals at their brewpub bar for years and must have tapped well over 100 different beers since first opening the doors to the public, yet, as spring 2019 looms, Tallboy & Moose have released their first "proper" can. They've chosen to do so with a beer that brings together elements of many others than have poured through their taps – haze, hops, oats, fruit and cream.

It's called Pillow Fight, is tagged an "Oat Cream IPA with grapefruit", and it's easy to see why they called it such – and launched it with a slumber party – as it certainly is a pillowy affair. Not so much in the wantonly fulsome manner of, say, a St Bernadus 12, more in the way the oats and lactose take a baby soft blanket to proceedings to smooth away any sharp edges.

Citrus is there on the nose, but wrapped in cotton wool to the extent it has an almost peachy quality, while there's an borderline tart, cleansing fruit character slicing through the pale yellow, hazy midst to offer some textural balance. It all makes for a quirky opening can release that delivers on its creamy IPA plan and comes wrapped in an eye-catching, Scandi-inspired label too.