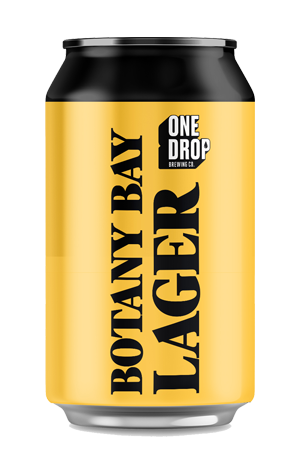 When they were first deciding on what their core range beers would be, the owners at One Drop knew a lager would be the most familiar style for the people in the local community. They decided to name it Botany Bay Lager - their locals can walk in and know what to expect before they’ve even tried it. A sensible, well thought out business decision.

Mention it around brewer Nick, however, and he’ll likely interrupt with: “Lager is king! Long live the king!” His reaction to this beer comes straight from the heart.

Perhaps because of this diversity in the One Drop team, the Botany Bay Lager is a solid all-rounder. For a cruisy Sunday sesh in the sun, it’s an obvious pick. It’s golden and bright, with the sparkling carbonation enough to lift the aroma but not so much as to overwhelm your mouth. Grain on the nose gives way to fruit notes on the palate, but those flavours soon subside like water from the bay drifting back out to sea, leaving you ready to tuck into another.

But if you want to geek out over a well-made lager, this beer isn’t a bad choice for that, either. The Botany Bay Lager ticks all the right boxes in the technical department, and it took a gold medal just months after launch at the 2019 AIBAs to prove it.