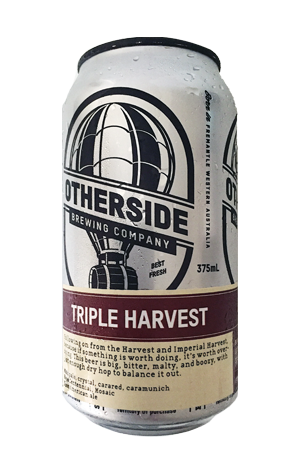 “This beer is big, bitter, malty and boozy”.

When a brewery provides this kind of quippy truth there’s little more that needs to be covered; nevertheless, those new to Otherside may like to know that Triple Harvest is a thrice scaled version of Harvest, their debut core range red ale that’s become a local favourite in WA.

The key to such experiments is balance. Sure, more of a good thing can only be a good thing, however the reality of brewing means exponentially altering ingredients and ratios to hopefully deliver an expression that’s both bang on the original but also bigger and better. It’s a quite a tightrope of expectation, from brewers and punters.

At double digit scale, torched toffee and chewy caramel weave throughout the beer, although Triple Harvest’s sweetness remains astutely in check. There’s a minerality derived from the firm but tight bitterness and booze presence, likewise some peppery warmth, while a slight savoury undercurrent provides gravitas.

But is it three times as good? Those that just like to read the can will find that this is indeed “big, bitter, malty and boozy”. And maybe that’s enough.

Limited release from the brewery, Freo.Social and Otherside stockists nationwide