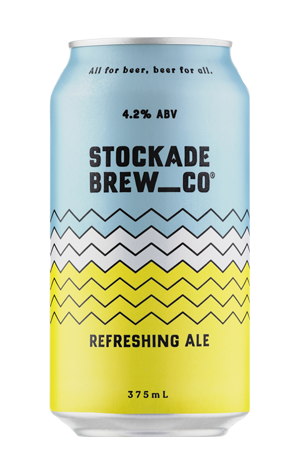 Refreshing Ale is the lightest of the Stockade’s core range launched mid-2019, and the most easy-drinking by far. While it’s technically an ale, it feels like a lager with a touch of New World influence. The aroma brings just enough notes of red apple, passionfruit and lemon to draw you in, where the clean quenchability (yes it’s a word - I checked) takes over, bringing light grainy malt flavour and a hard and fast dry finish to leave you ready for more.

The “refreshing” in “Refreshing Ale” seems to refer to both the reinvigorating feeling of drinking one of these beers, and hint at the idea of knocking back a few in a row, like hitting the Refresh button repeatedly. Clever use of words there, Stockade. Bet you wouldn’t have had to use Google to check if quenchability is a word.