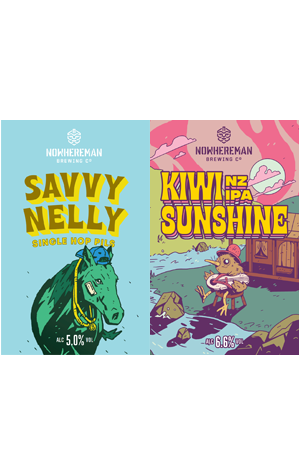 First out of the gate, Savvy Nelly’s colourful equine decal evokes a tight run through a lean pilsner base with a traditional crisp approach and modern hop embellishment that only a green horse can provide. New Zealand Nelson Sauvin shines with bright grassy and stonefruit characters, complemented by white wine and subtle melon. The clean, bitter finish persists just long enough to warrant another savvy sip.

Next up is the debut of Nowhereman’s rotating IPA series, one which means there will always be an IPA on at the brewery showcasing hoppy nuance. The New Zealand hop combo of NZ Riwaka and Motueka in Kiwi Sunshine are as intriguing and playful as the jandal-guitar playing kiwi on the decal. A big whack of lemongrass and background herbal aromas lead the West Coast leaning IPA before delivering almost perfumed candied tropical fruit on the palate, plus a touch of spice that resolves in a round but dry finish.