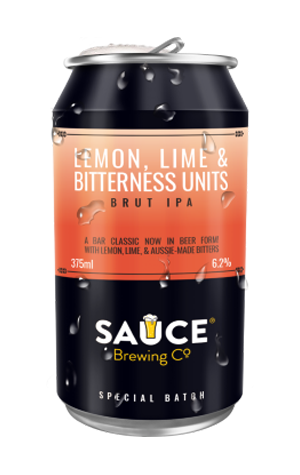 There’s a lot of fun to be had with the trend of naming beers after a non-beer food or drink - whether a chocolate bar or lolly, a juice or cocktail, a dessert or something else. That fun is intensified when the beer delivers something pretty damn close to what’s on the label.

Lemon, Lime & Bitterness Units nails it. If you’ve ever ordered a lemon, lime & bitters at a pub and had them make it in front of you (as opposed to pouring a glass of the packaged soft drink), this is sure to bring back memories.

The most surefire way to achieve culinary doppelgänger status is to include the appropriate ingredients; with a clean brut IPA as the base beer, Sauce added lemon juice, lime juice and 15 litres of aromatic bitters to the fermenter. Perhaps it’s this writer’s imagination, or the power of suggestion due to the pinkish hue on the label, but the bitters even imparts a slightly rosy colour to the drink, though perhaps less than the beer’s namesake.

When it comes to the aroma, the fragrant bitters win the day, though an edge of grapefruit zest is likely due to the citrusy hops more than the lemon and lime. A hint of lemony tartness up front dissolves into more of a lemonade-y flavour, which manages to holds its own alongside the herbal, almost Turkish Delight aspect from the botanicals in the bitters. The backend is sherbety, with a soft sweetness that welcomes a crisp and spritzy finish.

The main difference between this drink and a highball of the pub classic? Not for children or designated drivers.