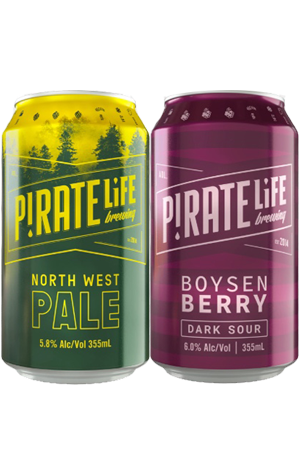 You never know when a memory is going to be brought back to life – or indeed what those memories might be. In the case of Pirate Life's Boysenberry Dark Sour – one of two Dan Murphy's exclusives from the brewery in 2019 – it's sitting in the dining room of the Holiday Inn in Dover circa 1985 and ordering the ridiculously sugar-laden soft drink they had on the kids menu; I can't recall the name but it was essentially Coke with blackcurrant cordial in it (what were my parents thinking?).

Here it's the appearance that's responsible for the nostalgia as the intense cloying sweetness of that tooth-rotter isn't there; instead, you have a relatively gentle sour, more akin to the experience of chomping on a tangy tart boysenberry itself than anything too lacto-derived. That said, it delivers its acidity to the end, allowing the sweeter, dark and malty side to play second fiddle while rounding out the palate.

The NW Pale nudges into amber territory colour wise – darker even than the core range Pale – yet isn't as big on the sweet caramel / toffee malts as you might inspect. Instead, there's a drying toasted element that folds in with the lean and quite aggressive bitterness that itself follows on from a mix of piney, citrus rind, earthy and resinous hop characters.