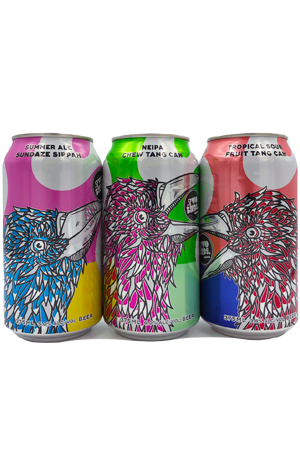 A new season brings with it a new lineup of beers – and another punny title – from Two Birds as they launch a trio of beers under the Brew Tang Can moniker. It's a name as colourful as the cans, with the beers resplendent in pinks, reds, greens and yellows.

The trio appears chosen with the belief warmer days lie ahead, made up of a summer ale, fruit sour and NEIPA. The first of these, the Sundaze Sippah reminds me a little of Gage Roads' bestseller, Single Fin – a bright yellow pour with rounded aromas of sweet melon and citrus – but with a touch more bitterness than the WA brewer's flagship. The Golden Ale is dead. Long live the Sippah!

Chew Tang Can is the name given to the NEIPA, although don't go thinking that means you'll be tucking into some turbid gloop. Sure, it's hazy as, but underpinning the grassy, lemon citrus and tropical fruits (from a combo of Equanot, Citra, Amarillo and Mosaic) in this evolution of their Jucius Caesar and Piña Dorada, you'll find a beer that presents a little leaner and with more bitter grip than some of its brekkie juice peers.

Which brings us to the fruitiest of the three, the Fruit Tang Can tropical sour, which radiates from the glass with a vibrant, witbier like hazy glow. I picked up heaps of guava and mango puree characters on the nose and it turns out there's passionfruit in there too. There's also an acidity on the palate that ensures it's not as heavy as the aromas might have you believe, and just a hint of lacto funk in the mix too. Fruit juice for grown ups.