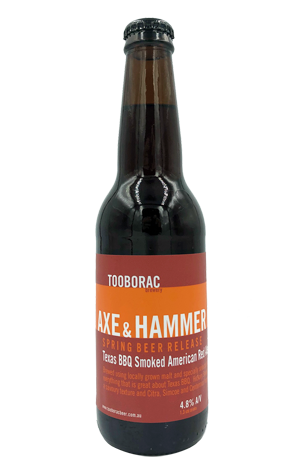 When most breweries conceive springtime releases, they tend to favour something lighter, something that anticipates warmer, sunnier times ahead. For Tooborac, they also appear to be looking ahead to such times but have honed in on one particular activity that rises in popularity as the sun starts beating down: BBQing.

Axe & Hammer is a "Texas BBQ Smoked American Red Ale" – a mouthful of a style to say and a mouthful of a beer to boot. There's hickory smoked malt and smoked paprika in the mix and, boy, do you know as it possess a hearty smokey character that goes beyond the sweetness of many such beers into fiercer territory that brings to mind feisty Islay whiskies. There's a drying bite that cuts through the initial bacon flavours like the charred edges of a BBQ'd slab of brisket and, while there's some sweet malt and fruity hops at play, the smoke is very much the beer's defining character.