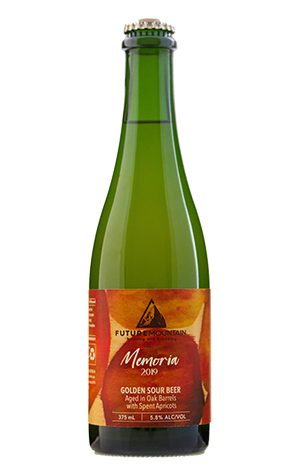 Even before they opened the doors to their Reservoir brewery, Future Mountain’s Ian and Shane were busy working with local farmers to get their hands on seasonal fruits for their beers. They were keen to brew for the seasons, finding the right fruit when it was ready and thus bringing beer and its agricultural roots together.

They’re not quick to waste any of that bounty either, as Memoria is a testament to using apricots that had already had one beer flow through them. The first was Two Wheeled Gypsy Queen and, as soon as that beer was ready, a golden sour was added to the apricots. That second beer spent six weeks on said apricots, with the fruit not nearly as prominent as you might find in some apricot sours, instead adding a subtle underlying note. What it does have is a substantial weight to the palate and light stone fruit flavours balanced by a bright acidity.