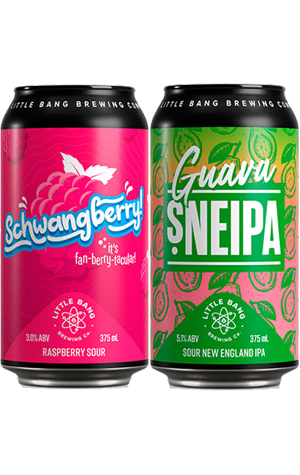 The Stepney brewers are at it again, releasing two new beers that are variations on their Schwang and sNEIPA ranges. Next up in the kettle sour range of Schwangs comes Schwangberry, utilising fresh raspberries to add a tartness, fruitiness and a vibrant colour to the beer. Due to the hefty load of added fresh raspberries, the beers pours a hazy bright pink with a light white head. A decent acidic aroma announces itself initially, along with solid backing from the fresh raspberries. It's an easy-drinking kettle sour, with a subtle tartness, a hint of wheat and, of course, the fruit. The Schwangberry is sprightly in carbonation and, at just 3 percent ABV, it's easy to schwang on all afternoon.

New World NEIPA collides with Old World sour in Little Bang’s latest sNEIPA; this time, they've added a solid whack of Queensland guava into the mix, creating a tropical fruit bowl in a glass, one that pours with the traditional NEIPA cloudiness – light orange in colour with a bright white head. The guava shines through quite prominently, with juicy tropical aromas the dominant aromas along with a touch of coconut and a slight tartness. The juicy fruit continues on the first sip, with a multitude of tropical fruit flavours coming out to play: guava, papaya and even some mango. The Guava sNEIPA is more NEIPA than sour, bringing forth a summer party in a can.