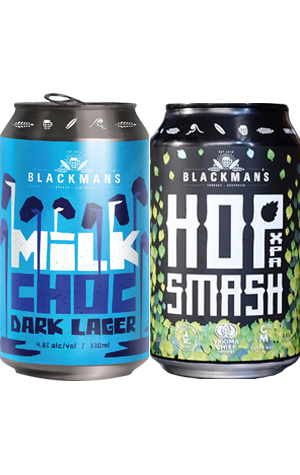 Two limited releases at once for Blackman's as spring starts to warm up. One continues their fondness for lagers, and indeed darker ones, with Milk Choc Dark Lager sitting somewhere between a Schwarzbier and a chocolate porter in character. It's fuller in body than the former; indeed it comes across bigger than its 4.8 percent ABV would suggest, which allows for a richer chocolaty experience, with a drying roastiness there to add balance.

As for Hop Smash, it's one of many collabs that first appeared at this month's BrewCon, with the Torquay brewers getting to play with experimental hops from Yakima Chief in the US and the recently-revived Melbourne Ale Yeast from White Labs. Tagged an XPA, any smashing on the hop front is rather more subtle than the name would have you believe, with floral, grassy and citrusy hops present more than potent and just a touch of sweetness at play too.