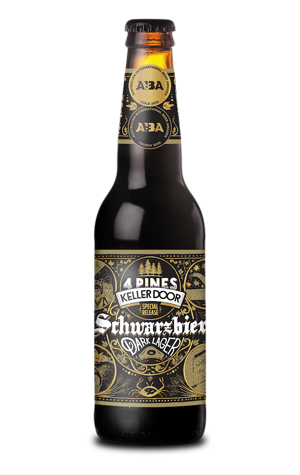 We don’t see too many Schwarzbiers in Australia and, when we do, we rarely seem to think much of them. But it’s hard not to take notice of this one by 4 Pines. Originally brewed as part of their Keller Door Black Box in 2016, the Schwarzbier was the most subtle of the box, but was surprisingly flavourful and complex, a worthy inclusion alongside its brawnier black siblings.

In 2019, the brewing team knocked up another batch - just ten kegs - in their Manly brewpub, and entered it in the AIBAs, where it promptly walked off with the biggest prize an Aussie beer can claim: Champion Australian Beer. In response, they’ve brewed it again, but this time for wider appreciation - as a national release Keller Door Small Batch 4-Pack.

On the technical side, 4 Pines have gone about as traditional as you’ll see in Australia - an Australian pale base malt has been paired with German-produced specialty malts, German noble hops, and a lager yeast strain that originated from Weihenstephan.

It’s dark as anything, with light tan foam, yet isn’t heavy. There’s roastiness, but absolutely nothing harsh about it. It moves seamlessly from complex flavours - hints of cola and coffee liqueur, chocolate and the tiniest touch of smoke - to a clean exit.

This beer drinks like a ride in a black Porsche, with soft leather seats and a gentle purr as it pulls away from the curb. And, when it’s over, nothing but the memory of a smooth and luxurious trip - and perhaps a sneaky selfie.