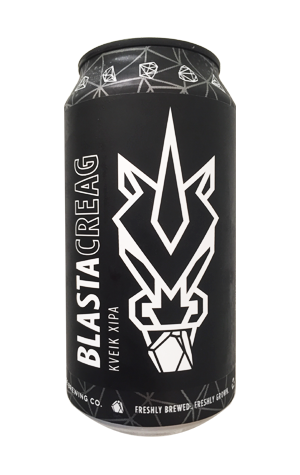 Returning the favour from their recent Blasta x Rocky Ridge collaboration, Incan Saison this time around the pair’s brew at the latter's farm brewery continues the theme of using interesting yeast, in this case kveik. Somewhat tenuously, and more than a little tongue in cheek, Rocky Ridge’s Hamish Coates says the Norwegian strain is on its third generation and, as such, could now be known as an Australian kveik strain.

Smirks aside, the yeast is the dominant factor here. Hamish says all of Blast Creag’s aroma is yeast driven, which he suggests as overripe oranges, nectarine and apricot; our sample also displayed what I find is becoming a consistent earthiness with kveik-fermented beers. Despite its substantial booze and mouthfeel size, there’s very little in the way of bitterness or alcohol presence, something instead replaced with a NEIPA-like chalkiness.

NB: If you’re wondering about the name, Blasta Creag is Gaelic for Tasty Rock.