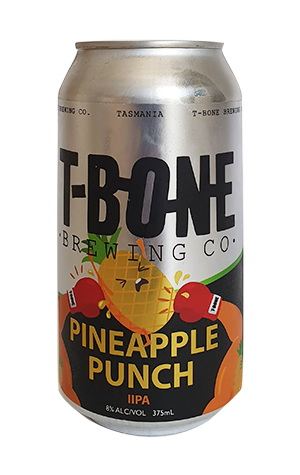 Off the back of another limited release, Bloody Helles, a beer that combined a German lager base with blood orange, T-Bone have turned to another fruit that often finds its way into hop flavour descriptors: the pineapple. Taking a hopped up 8 percent ABV double IPA and layering pineapple juice on top, Pineapple Punch is a beer that, well, you know… packs a punch.

With a decent whack of malt sweetness and a big bitterness too, it’s a little like the maltier IPAs that were easier to find in days gone by. And, while the pineapple is unsurprisingly the dominant flavour on show, it's not alone; instead, it's joined by peach and rockmelon in a tropical mix that might not knock you out in the manner suggested by the can art, but certainly makes its presence known.