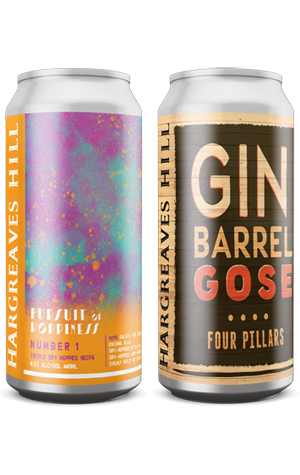 Having tested with water initially with their sibling brand Beatnik, it would appear Hargreaves Hill are fully embracing the world of the tinnie, at least when it comes to their limited releases. They're coming thick and fast too, with Pursuit Of Hoppiness the start of a new series focused on, as far as we can surmise, hops.

Number 1 is a "triple dry-hopped NEIPA", one in which Aussie varieties Galaxy, Vic Secret, Enigma and Ella have been added to the beer at a Cloudwater-esque 24 grams per litre – a little on the day the liquid was transferred to the fermenter but mostly mid- and post-ferment. The result is, as you'd expect, hazy, and also one that comes in three parts. There's the creamy and rounded lemon and lime curd aromas (with a flash of the tropical). There's something sweet and vanilla crust like in the middle of proceedings. And then there's a bitterness that's more green and resinous than juicy. Next up, we're told, is a quadruple dry-hopped double IPA or similar as the pursuit gains in intensity.

Leaving the brewery at the same time is the latest collab with Yarra Valley neighbours Four Pillars. This year's Gin Barrel Gose – a gose that spends months in the distiller's gin barrels – has the sprightly nature, lacto tang and decorative botanicals of past years. This time around, it presents as if someone's squeezed then dropped in a couple of large slices of fresh lime too.