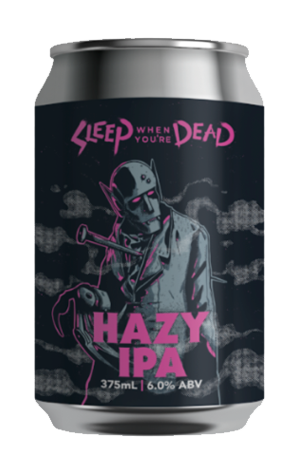 Ballistic’s New England IPA was probably the beer that made people pay attention to their Sleep When You’re Dead series more than any other, and this Hazy IPA is closer to the NEIPA than some of the other styles they’ve toyed with. Like the NEIPA, it was born after the brewers came back from a “work” trip to the USA all re-invigorated and inspired to make hazy beers as good as those from the East Coast. And like the NEIPA: keep it cold, drink it fresh, and it will reward you richly.

This double dry-hopped beauty pours the dirty orange colour of nectarine flesh. A frothy head has stonefruit and Fanta aromas launching at your nose like a vampire launching at its prey. (That’s a sneaky little reference to the vampire on the label - an ugly beast that’s less like a Twilight vampire or Spike-from-Buffy, and more like a Blade vampire or The-Master-from-Buffy.)

But you only have to take a sip to see there’s nothing scary about this beer. It drinks like orange juice mixed with syrup from a can of peaches (without the super-sugary-stickiness), delivering some sweetness up front, and gentle bitterness on the backend. The texture is smooth as smooth can be, like how a cat must feel when it licks its kitten's fur.

As my drinking partner announced after the first sip: “This beer is just good, clean fun.”