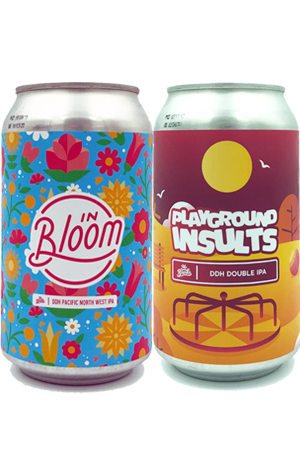 If there's one thing they love at Mr Banks it's an abbreviation. Actually, make that two things: they love IPAs. Although, if you think about it, they really love hazy beers too. Then there's the... actually, this is getting all Monty Python, or maybe Steve Martin at the end of The Jerk, so we should probably move swiftly on... to two beers that feature abbreviations, IPAs and haze galore.

Starting with In Bloom, a DDH Pacific North West IPA they say is something of a blend East and West Coast American IPAs hopped with Simcoe, Amarillo and Cashmere. Amid the hazy pale goldenness is a rather deep hop character: piney and pithy rather than noticeably fruity – more Nirvana's In Bloom than the explosive bloom of colourful cartoon flowers on the label – albeit with some sugary sweetness woven throughout.

As for Playground Insults, it's a DDH DIPA, one featuring Citra (in pellet and CryoHop form), Azacca and Vic Secret and pouring with a witbier-esque paleness and the archetypal Mr Banks haze. There's a lean citrusy aroma – lime and lemon, maybe a little grapefruit – while it's more tropical to taste, where you're met by some booze-and-carbonation-derived prickle too. Leaner and lighter than such a beer has any right to be, its relative weightlessness aided by a cocktail lime like sharpness.