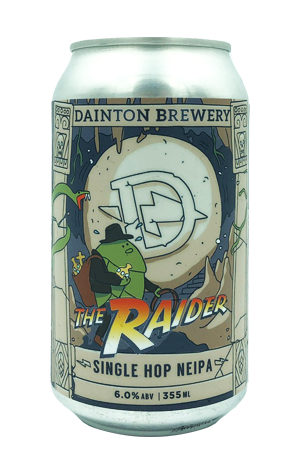 When you're on a mission to release a new can every week of the year, it helps to have a few shortcuts, such as taking an Other Half-esque approach to IPAs and releasing a bunch featuring different hop varieties. Given hop growers all over the planet are in a similar arms race to brewers when it comes to creating something new, there's a broad palette to pick from too.

For The Raider – complete with Indiana Jones-mimicking artwork – they plumped for one of the Kiwi varieties getting people excited thanks to its depth of big, fruity abilities. At this stage, it's going by the rather unappealing working name of HORT 4334, but there's plenty of appeal in this NEIPA.

For the 'Grammers, there's a solid haze and the foamiest of heads. For those that likes their hop aromas and flavours delivered with the minimum of subtlety, there's overripe citrus, candied dark berries, tropical fruits and some weedy dankness that makes an appearance as the liquid warms. There's a boiled sherbert sweet character there too, underpinned by a welcome flash of bitterness (albeit not what you might expect from the 45 IBU declared on the can, presumably due to the sweetness).

Mouth-filling both in body and character, The Raider settles in like a cumulonimbus cloud atop your tongue rather than heading, Indy-like, for a quick exit.