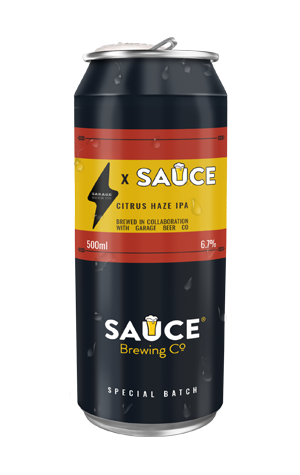 Sauce Brewing have become known for some damn fine hoppy and, more specifically in recent years, hazy beers. Garage Beer Co from Barcelona have become world-renowned for their NEIPAs. So, when the Spanish brewers recently visited Australia, the team at Sauce knew they had to bring them in for a collab brew. The result, brewed in an Australian brewery and given a label the colours of the Spanish flag, was Citrus Haze IPA.

The partnership sure didn’t skimp on the haze, dialling it up to almost milky levels. As far as citrus aromas go, there’s orange and grapefruit, but there’s also a hint of melon, and a mix of sweet pineapple and sharp, tangy pineapple, like two different pineapples were cut up and mixed together. A gentle grapefruit zest bitterness creeps in, along with an interesting moreish aftertaste that I couldn’t quite put my finger on, but someone suggested might be slightly salty. Or perhaps it was just the taste of transglobal collaboration.

Fun fact: if you run “Bubble & Squeak” through Google Translate from English to Spanish and back to English, you get “Bubble & Birdie”. Name of Sauce’s next hazy IPA?