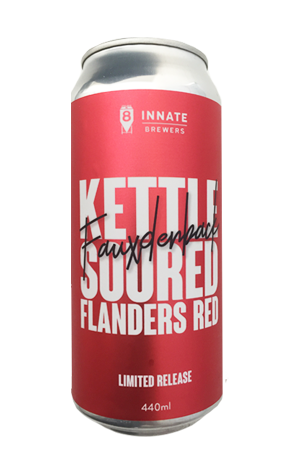 It’s a funny name. Once you get past the chucklesome reference, the idea of creating a kettle soured version of one of the world’s most iconic, awarded and influential beers is rather hilarious. Or at least it is until you actually try it.

Whether the result is driven by chutzpah, deft technique or, most likely, a combination of both, Fauxdenbach’s mimicry is impressive. Sure, the oak depth and implied cherry tones aren’t the same as one would expect from ageing liquid for three years in near 200-year-old foeders crafted by the in-house coopers in Roeselare, Belgium, home of Rodenbach. However, fermenting on locally sourced oak chips has worked a treat.

Nor would one expect to find the complex sourness, a result of careful bug management over decades in the original beers, yet the crisp, simple lacto-sour profile here ably punches above its weight. Indeed, with an open mind – and palate – many drinkers will enjoy Fauxdenbach, especially if they keep in mind Innate’s flattery, which began with the question: "Why not!?"