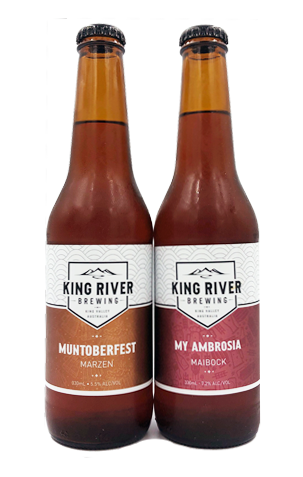 Barring the odd concession to modernity, such as his IPA, Nathan Munt prefers to take inspiration from the old European ways. Arguably the highlight of King River Brewing's short life to date was a gold for his most personal beer, the Waiting For Godot Belgian Tripel, at the 2019 Indies. So you can imagine he puts more weight than most on the time of the year that Oktoberfests rule the land; in King River's case, they even call it Muntoberfest.

Two of the beers appearing at the 2019 running of the festival at their King Valley brewery are Muntoberfest (to be renamed Marzen going forward) and My Ambrosia, a Maibock. Both are lagers that lean towards the malty, with Marzen amber in colour and with a sweet, treacle like character running right through it, with a little nuttiness there for company.

Of similar hue is My Ambrosia, a beer that ups the booze not inconsiderably from 5.5 to 7.2 percent ABV. The aromas don't leap as much as the Marzen, but you'll find plenty of sticky caramel malts flavours to get stuck into in a beer that proved a hit at GABF Albury. If it was a little drier at the finish, it would slide down a little easier, although, at that ABV, if that were the case, so would you.