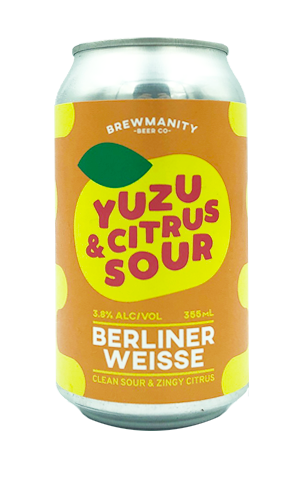 I guess the joy of catching up with an AFL legend – one who has a bar named after him at the CUB fortress that is the MCG, no less – to take delivery of a new beer release should have subsided by now, especially as David Neitz has been in the game with Brewmanity for years. But, let's be honest, moments such as chatting to him about the recipe and brewing process for their Yuzu & Citrus Sour remains up there with the unlikeliest of the many unexpected delights that have come my way since embarking on this whole Crafty malarkey.

This isn't the first Berliner Weisse he's produced with Brewmanity team members Jamie Fox and Mick Jontef, but it is their first sizeable batch of such a beer and the first to hit the market in cans. And, with the weather looking like it's finally going to take a turn for the warmer in their hometown of Melbourne, it's well timed.

Aromas are of the lemon, kaffir lime and grapefruit sort, thanks to the blend of Japanese yuzu fruit and locally sourced citrus, and they come across more juicy than sharp or pithy. There's a pleasant depth to the fruit flavours too, a surprisingly rounded body set against lively carbonation and a gentle rather than bracing tang, plus a little wine like minerality and just the faintest hint of lactobacillus' funkier side.

If you're after the potent acidic hit of, say, La Sirène's Citray Sour, this isn't it, with "sour" playing second fiddle to the fruit. Instead, you've got a refreshing mid-strength alternative you can see flying out of fridges through summer; a potential third core beer for Brewmanity down the line, perhaps?