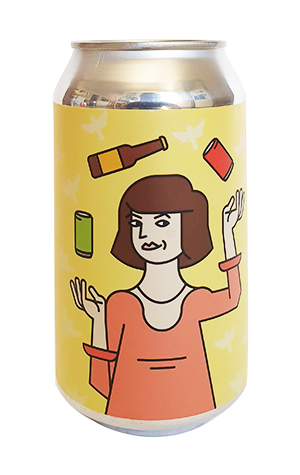 The crew at Blackhearts & Sparrows haven’t just been hard at work opening new stores of late (you can read the story of the family-run bottleshops here), they’ve also been collaborating with an increasing number of breweries too. Among their collaborators are Melbourne gypsy brewers CoConspirators, with whom they brewed The Merchant, a feijoa sour complete with a label designed in the likeness of Blackhearts co-founder Jess Ghaie.

Though the feijoa doesn’t have the same kind of popularity this side of the Tasman as it does in New Zealand, as luck would have it, my childhood was filled with them. Two bountiful feijoa trees – one at home and the other by the soccer grounds at my primary school - leaves me me with a feeling that I'm well placed to comment on the fruit. One thing is for sure: The Merchant is a golden and fluffy beer that packs a lot of feijoa into one can. Underneath that flavour there's some ripe pineapple and mandarin to be unearthed in a beer where the tartness is nicely balanced against a lactose-derived sweetness.