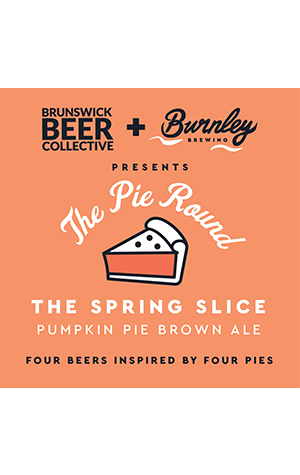 Earlier this year, Burnley Brewing and the podcasters at the Brunswick Beer Collective teamed up to launch the Pie Round, a four-part series that would see a different pie-inspired beer released each season. July’s beer was the very warming Apple Pie Imperial Stout and for spring and Halloween, the collaborators went for a pumpkin pie brown all. The Spring Slice saw Burnley’s chefs cook up some 68 kilos of butternut pumpkins that the brewing team threw in the kettle along with cinnamon, nutmeg, clove and brown sugar.

In North America, pumpkin beers are being brewed on almost every corner this time of year but we don’t have as many beers to draw on here. What we can say is it’s a dessert beer that seems brewed with warmer weather in mind. It’s quite sweet and the pumpkin flavour matches against the richer malt flavours and while there wasn’t much cinnamon, let the beer warm up and you’ll find a light mix of nutmeg and cloves.