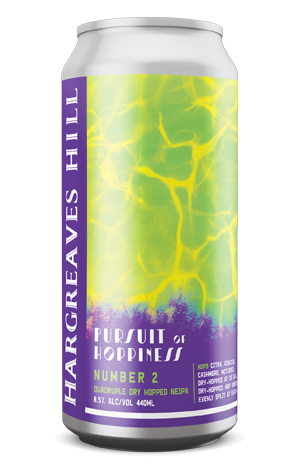 As brewers play around with ever greater levels of hopping, stages of dry-hopping, and how hops behave at different times and in conjunction with different processes within each brew, it's easy to imagine them huddled over spreadsheets and graphs plotting the next experiment. Certainly, it feels like the second entry in Hargreaves Hill's Pursuit Of Hoppiness series leans more towards the latter when it comes to the oft-cited line about brewing being a case of art meets science – funky neon label notwithstanding.

Not only is it quadruple dry-hopped (meaning hops were added at four distinct moments after the beer was transferred to the fermenter) but the brewers ensured there was an even split of the four US and NZ varieties – Citra, Azacca, Cashmere and Motueka – at each stage. If my maths serves me right, there's a total of 25 grams per litre at play here, within an 8.5 percent ABV NEIPA – stats that are somewhat at odds with the end result.

Taken in conjunction with the statement on the label – "Our brewers dialled everything up for this one" – you might expect a chewy, opaque juice to come crawling out the cans, yet it's rather leaner, very pale and not particularly hazy. There is fruitiness, of course (how could there not be with all those hops?), with pineapple leading the way, while the high alcohol content makes itself known in the form of a sweetness that's present from nose to finish, and bitterness is kept on the low side.