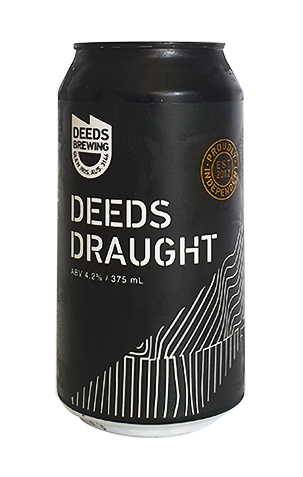 Since they first started brewing at their Glen Iris home in early 2019, Deeds Brewing have been releasing beers at a furious pace; and it's a brew schedule that shows no sign of slowing down. For the most part, those beers have been big and bold (not to mention hoppy) but Deeds Draught is an entirely different affair.

This addition to the brewery's core range is instead a lager that's more about subtleties and refreshment, where maize in the malt bill is designed to aid the beer's easy-drinking nature. While the brewery says it’s a South American-inspired beer, the first thought it brought to mind was a German Helles, with a soft, slightly grainy malt bill that's matched against spice and a citrus lift that comes courtesy of the hop combination of Mandarins Bavaria and Warrior.