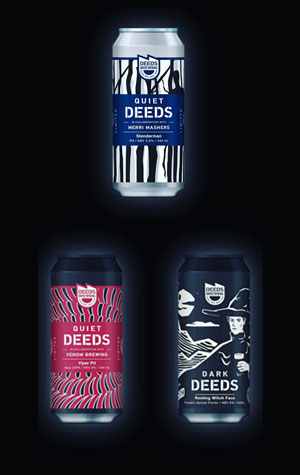 Halloween’s here to stay in Australia and as much as the American-inspired holiday might annoy many Aussies, all that we can do on that front is direct you here. Deeds Brewing looked to join those celebrations in 2019 by releasing not one but three rather spooky beers, which follow closely on from their Tallboy & Moose collab, itself inspired by The Shining.

The lightest of this trio is Slenderman, an IPA brewed with Merri Mashers member Rohan Lowe. Rohan took out the Deeds Brewers Choice award at a recent homebrew comp and was invited down to Glen Iris to brew his beer. What likely impressed was the beer’s prominent pineapple flavour, followed by some peach and a lean, one might say slender, body.

In the "whole lot bigger and cloudier" column is Viper Pit , a hazy double IPA brewed with Venom. Pouring it I was immediately reminded of the opaque and glowing yellow of Venom’s Hazy Double Golden Ale from earlier in the year; it has the same thick mouthfeel, too. While the Double Golden was filled with Kiwi hops, Viper Pit is packed with Citra and so it’s orange juice and grapefruit that are most prominent.

The final chapter in the Halloween trilogy is an addition to the Dark Deeds range, Resting Witch Face, which was brewed with Froth Magazine. It's a pumpkin spiced porter, in which upon a particularly roasty porter base, you’ll find no little spice and some stewed pumpkin flavour to boot.