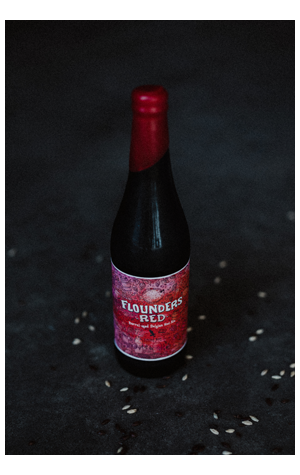 Gone are the days where a trip to Western Europe was essential for acquiring sour, complex, barrel-aged beers that carried with them notions of rarity and allure. Travelling is still an option, however modern breweries in all corners of the world are trying their hand at producing world class sour ales to rival those traditional offerings.

Eagle Bay Brewing are one of those breweries and here, in collaboration with North Fremantle’s Old Bridge Cellars, they've put out what they’re calling a Sour Belgian Red Ale. A carefully thought out mixed ferment and a lengthy stint in used wine barrels (previously holding Margaret River cabernet sauvignon for two years) help define this limited release, which features a unique label design and a wax-sealed bottle for added je ne sais quoi.

Flounders Red is brimming with complex flavours and assertive lactic acidity. The time spent in barrel has lent considerable funk, deep ruby hues and some wine like subtleties. Finishing with a generous carbonation, Flounders Red is full of flavour but balanced and well rounded. With just shy of a thousand bottles produced, this South West Australian Sour Ale may carry the notion of exclusivity, but is certainly worth seeking out.